Get It Under 3 Days

334 reviews
Original price $457.99
Original price $457.99
Current price $457.99 CAD
from $457.99 CAD
Current price $457.99 CAD
| /
Save up to $0.00 $0.00 Off
Best Price Guaranteed or We'll Match it
Upgrading front camera from DR590X-2CH to this.
Good are Canadian. Good products. Great prices.
I've been a Blackboxmycar customer for 8 years now!
I ordered VIOFO dashcam one month's ago but it was defective. I try to contact your representative for advanced RMA but he's not responded to me. I definitely need a dashcam for my day to day driving.
I had purchased a blackvue from you a very long time ago. Looking to get another. You had best price as well.
New vehicle replaces my DR 650 which has logged over 150000 km

The DR900X Plus offers fundamental upgrades, including an improved image sensor, while keeping the ultra-stealth design, Cloud integration and all of the great features. Your 4K UHD video footage has never looked better.

With its 8-megapixel CMOS sensors, capture the road ahead in 4K Ultra High Definition at 30fps - that's 4 times more clarity and details than Full HD. You don’t need a 4K monitor to appreciate 4K videos. Even on a Full HD monitor, you can zoom in much further without any visible pixilation.

The main change brought by the Plus Series is an improved Sony STARVIS CMOS sensor. The upgraded image sensor can preserve more details in extreme lighting conditions. Your videos are sharper and better exposed, preserving the critical details, day and night. 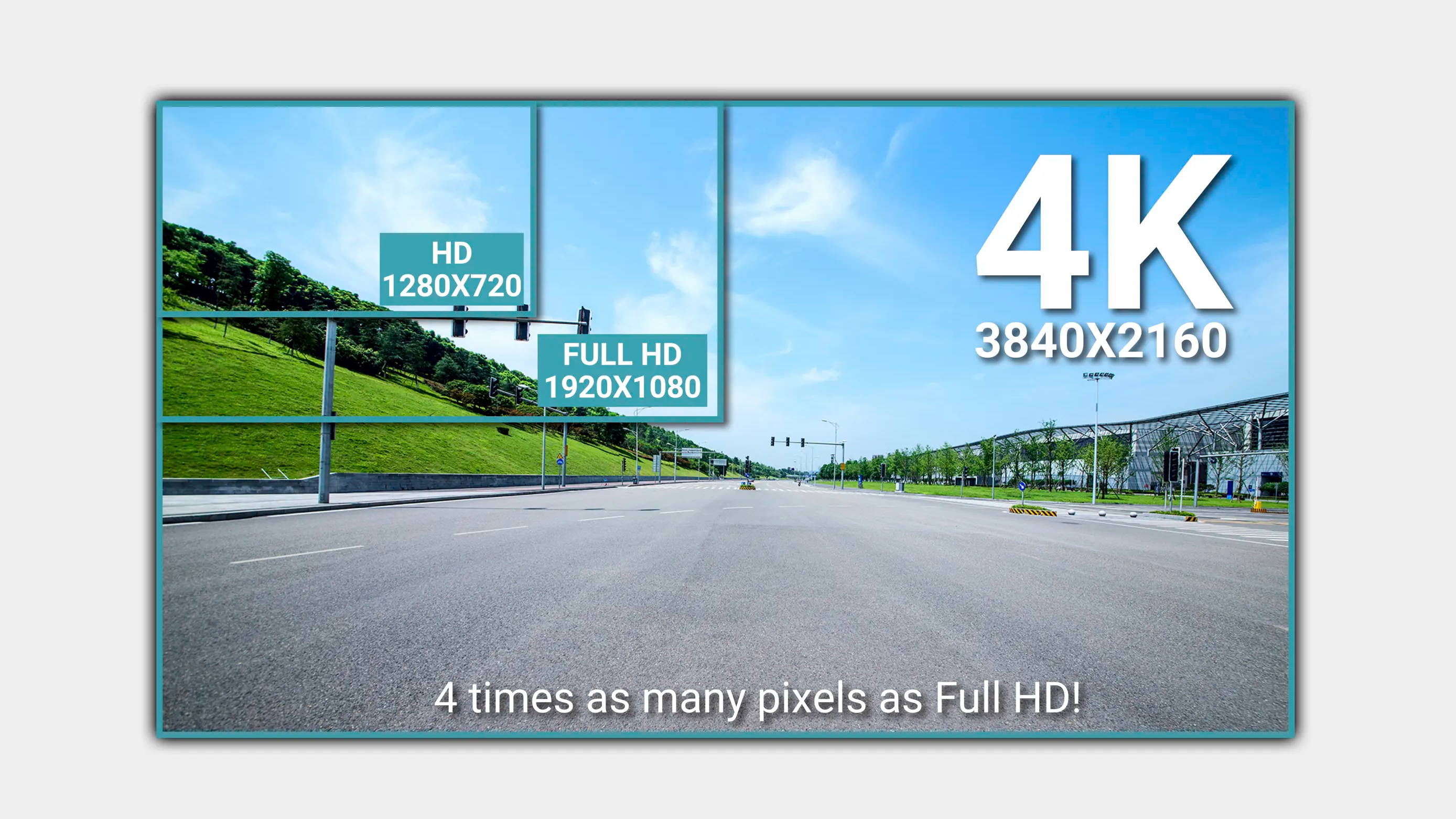 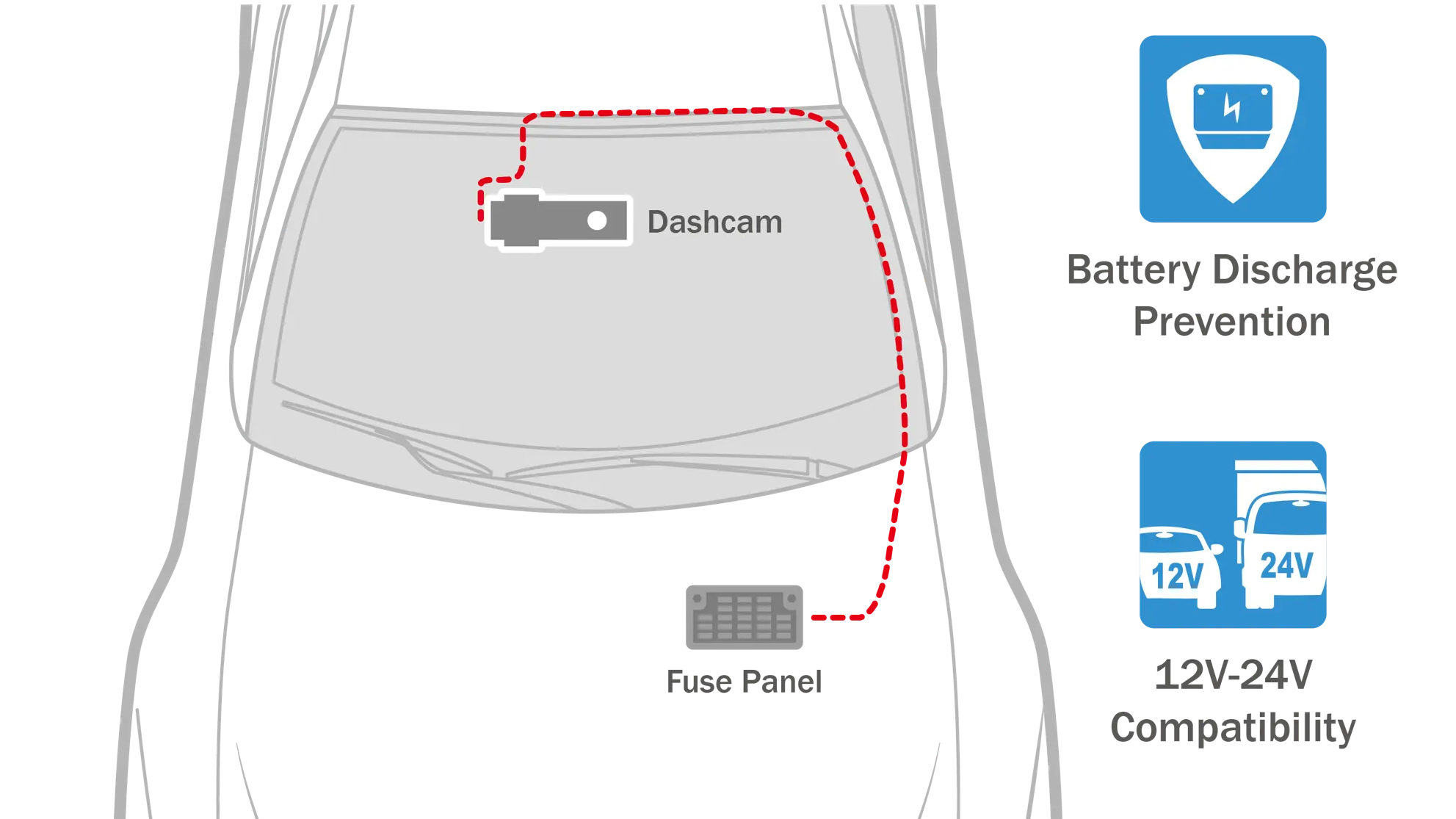 With advanced parking mode technology, your dash cam protects your car, recording videos when it detects movement or impact, even when you're not there. Buffered recording even includes the few seconds before and after the triggered event, so you get the complete picture.

With built-in voltage monitoring, you can hardwire the dash cam to your car's fuse panel without the need for additional accessories. That way, when you leave your vehicle, the DR900X Plus goes into Parking Mode while monitoring the voltage from your vehicle’s battery and shuts down if the voltage gets too low.

Certain makes/models of vehicles (BMW specifically) may require an extended hardwiring kit if the fuse box is located in the trunk. Please contact us if you need a hardwiring kit extension service.

The DR900X Plus comes with a universal secondary camera port on all front camera units - this means you can easily add on a rear camera, an infrared (IR) or an exterior IR camera to fit your changing needs.

With a rear camera and corresponding video cable, you can easily turn your DR900X-1CH Plus into a dual-channel DR900X-2CH Plus, DR900X-2CH IR Plus or DR900X-2CH TRUCK Plus. 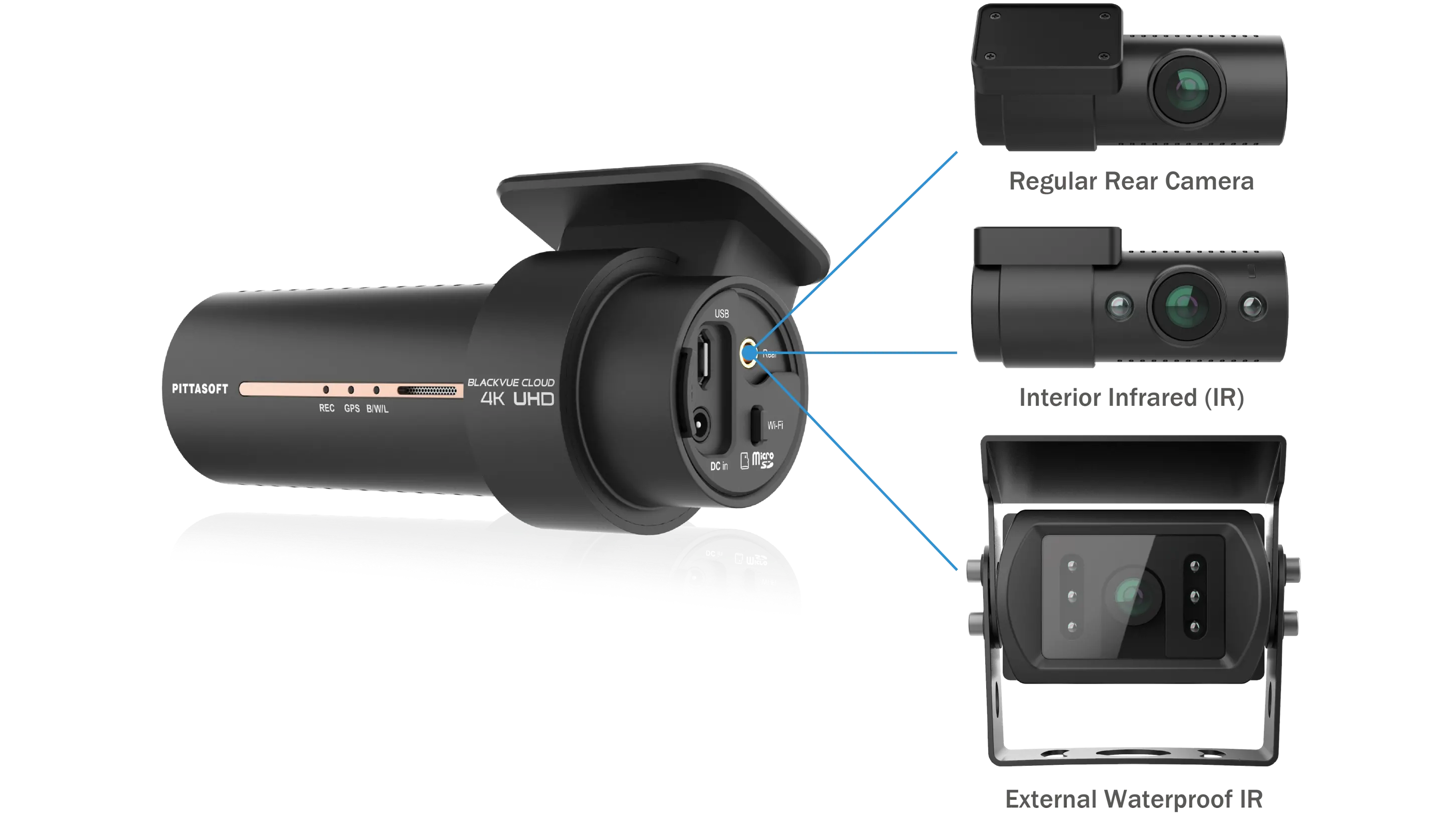 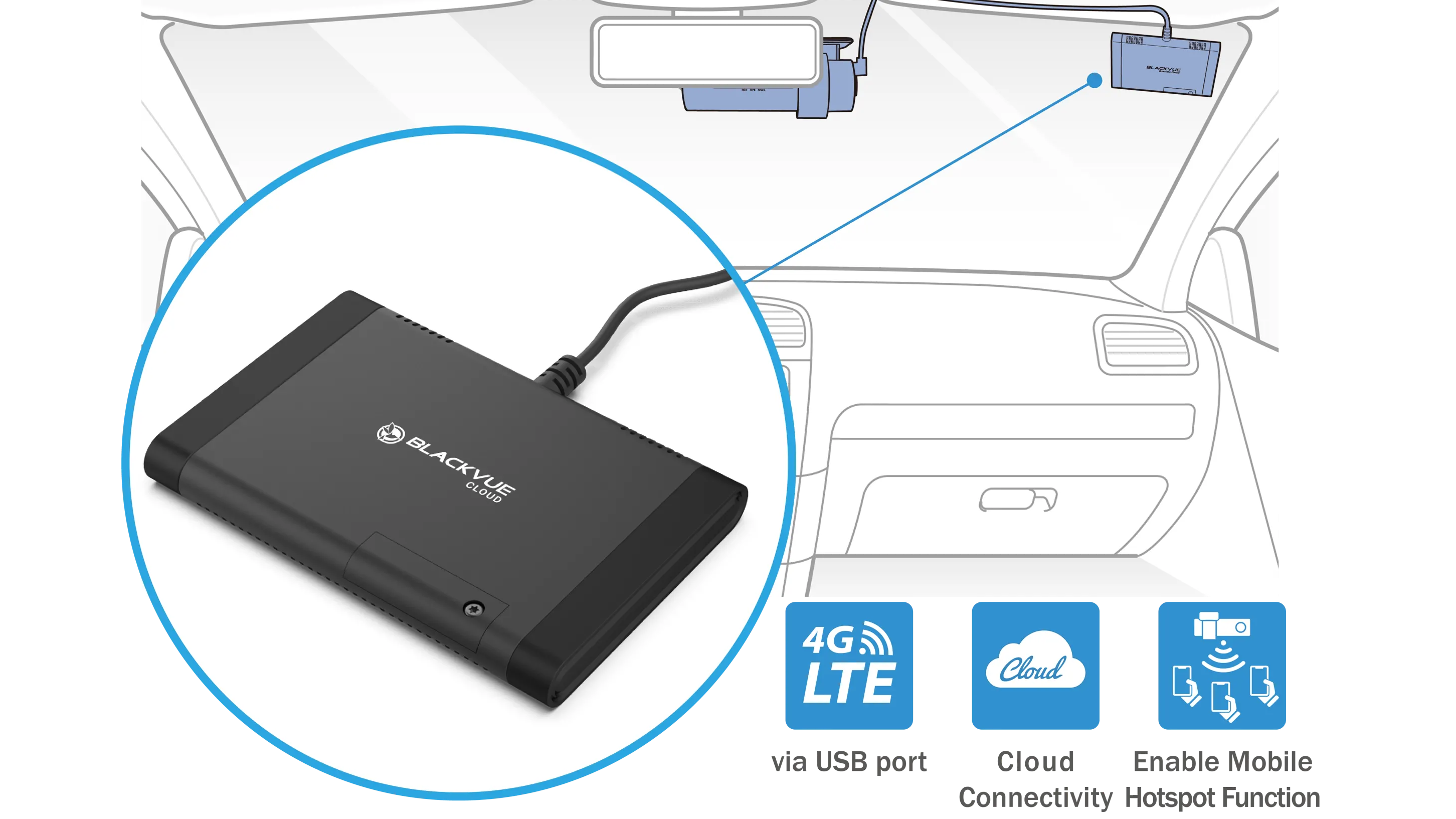 Be in the Know, Wherever You Go

With ultra fast dual-band built-in wi-fi & GPS, you'll know what's happened in blazing speed. Download your footage through 5GHz wi-fi, literally 2X faster than other dash cams running on 2.4 GHZ wi-fi. No more lengthy buffering when you're trying to figure out who (or what) bumped your car. Get location data right through your desktop or smartphone app viewer, all at the touch of a button.

This CM100G LTE-M is the North American version and is only compatible with North American SIM cards from T-Mobile, Telus, Rogers, Bell and their MVNOs.

The CM100G LTE does not work with 5G cards and is not compatible with any SIM cards from AT&T and Verizon.

Seamless Pairing with the BlackVue App

Whether you want to browse your dashcam’s files and settings or connect your dashcam to the Cloud, Seamless Pairing makes everything easy and intuitive. 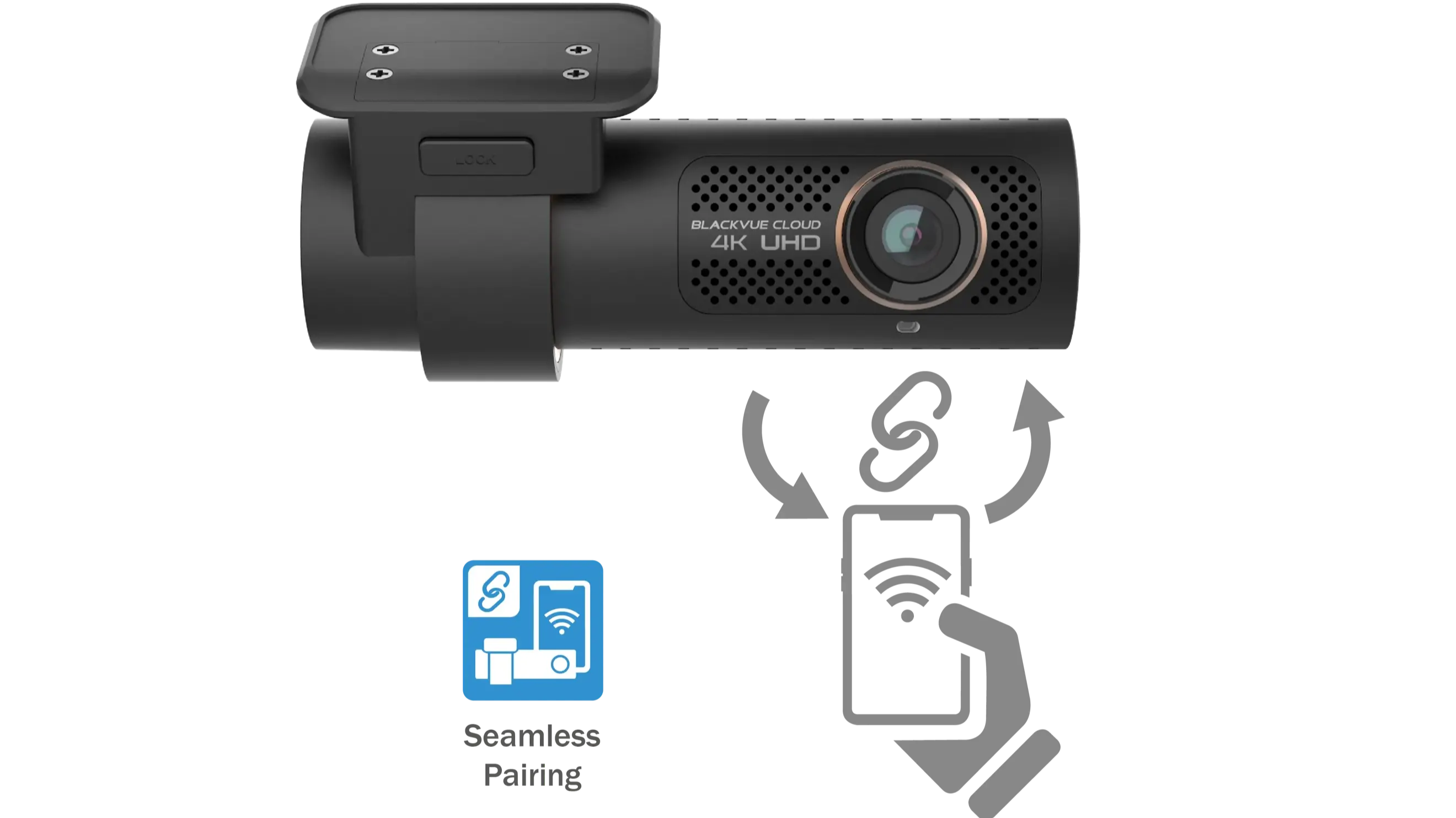 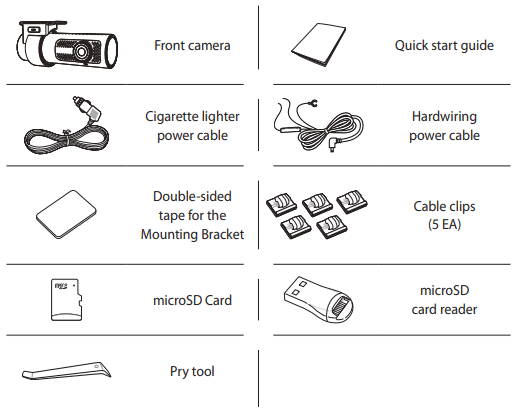 See helpful BlackVue questions and answers on our FAQ Knowledge Base.

My product came with a defective G Sensor that made the dashcam unable to go into parking mode after being idle for over a period of time. Michael from BBMC assisted with a warranty return and sent a replacement in a timely fashion. The replacement is working as expected. Thank you BBMC for the awesome support!

T
Thomas S. (Palm Springs, US)
Seems to be a good camera so far with areas for improvement.

Order and delivery process went smoothly with one little surprise. If you live in US and your order is more than 800 dollars, FedEx will send you a bill for something called Duty and Tax invoice. My bill is for 22.76, so shipping is not really free. I found this in small print on the website after receiving the bill, and I think it would be a good idea for blackboxmycar to make this very visible on the site so that others are aware of this fee.

Now as for the cameras, install was relatively easy. I did both cameras and the B-124X myself and I hardwired the battery to my fuse box. Glitch number 2., the fuse tap needed for my car was not included with the battery. My car (2015 Infiniti Q70) required a low-profile mini fuse tap, and the three that came with the battery would not fit. None of the auto parts stores carried this tap, so I had to order from Amazon. I think Blackvue or BB my car should include this tap simply because the battery is not cheap in the first place, and all parts needed to get going should be in the box.

I was not aware at the time I ordered the DR900X plus that Blackvue had decided to remove the ability to adjust brightness and resolution from this camera. With that being said I am getting allot of reflections in my rear camera from the back deck due to my rear window being tinted. I'm sure if I had the ability to adjust resolution and brightness, this could be resolved. Something to consider if your rear window is tinted. The video from the front camera is a bit darker than I would prefer also, but the image is very clear. I think Blackvue should reconsider removing these adjustments.

And now for the app. So, I have a Samsung S22 Ultra. The app kept crashing on my phone when trying to view video notices, to the point that my phone put the app in a deep sleep, in order to protect itself. Apparently, the app for android has a bug. Called Blackvue customer service and they are aware of the problem and trying to fix it is what I was told. In order to use the app with my phone. I was instructed how to download the old version of the app and install an older version of the firmware on the camera. After hours of troubleshooting, and rolling back the app and firmware, everything seems to be working now. The app needs work.
One more thing to be aware of: The camera uses G-sensors to detect impact, so when driving in normal mode if you don't drastically lower the sensitivity or disable by setting to zero, every bump in the road will be reported as an impact. Not only will you get constant notifications, but this will also eat up your cloud data plan because every bump is reported to the cloud. I feel Blackvue needs to look into resolving this.

Well, that's my review for now. They have been up and running for about a week now, so we shall see. Because of the app issues, I'm still a bit on the fence about keeping or returning them. I have until the end of January (thank you bb my car for the holiday extended return window) to make up my mind. I want to like and keep them because the install looks really good. I used the Blendmount sold on Amazon instead of sticking the front camera to the window. Hopefully they get this app fixed soon. Hope this helps anyone who is looking at buying this camera. Happy holidays to you. 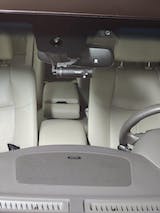 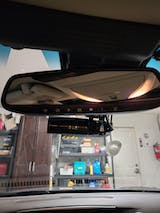 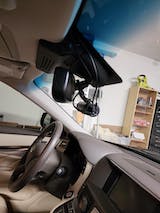